Self Propelled Artillery
​
Self propelled artillery provides mobility along with crew protection for advancing troops, one of the pivotal characteristics of the any fast moving strike corp to back it's infantry and armored brigade. Towed artillery is already in poor shape but the status of Self Propelled Guns is purely shocking.

Indian Army's self propelled artillery consisted of two formats of weapon systems, Conventional SPG's which superficially resemble tanks, but can provide light resistance against small arms and sharpnell, and a unique take on mobile artillery dubbed catapult, where a howitzer is stabilized and mounted on a tank chassis. 2S1 Gvozdika and the FV433 Abbot SPG formed the backbone of the conventional Self propelled gun, whereas the limited numbers of the m46 howitzer mated with the Vijyanta tank chassis formed it's catapult wing.

Following is the head to head comparison with the Pakistani Army Mobile Artillery outfit: 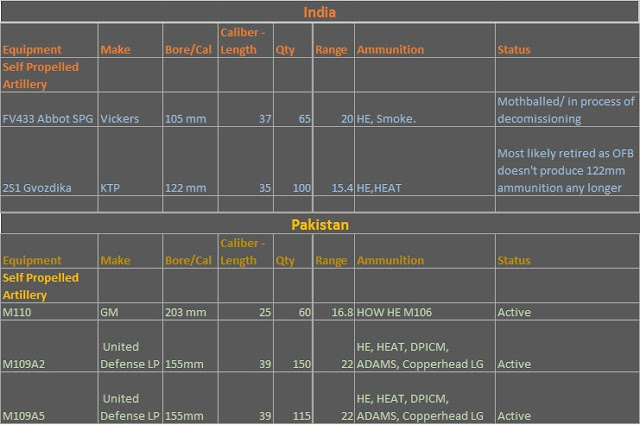 As of now compared to the 325 Self propelled Guns that Pakistan's Army fields, India has ZERO guns. All of the 2S1 Gvozdika 122mm howitzers along the 122mm towed howitzers have been withdrawn from service, and the Vickers FV433 too has been retired due to lack of spares. So the ratio as of now stands 325:0, and that is the reality of much touted conventional superiority.

With a minimum of 1:3 ratio against Pakistan Indian Army should have had at-least 975 Self Propelled Guns to be able to support forward deployment of mobile artillery units. India also needs multiple caliber strengths to ensure high mobility as well as cross country capability of the platforms. The interim solution was to build the Bhim SPG - essentially a Arjun Chassis mounted with the Denel L52 G5 self contained turret with the same turret being mounted on tatra trucks as a wheeled solution. The second track was to build the m46 based catapult on the Arjun chassis. The Bhim SPG was scuttled due to allegations corruption and the Arjun Catapult disappeared mysteriously.

Indian army has already selected the K9 Vajra - Techwin-L&T SPG as the replacement for the 2S1 Gvozdika 122mm. The rest would be filled by the "Mounted Gun System" a predominantly wheeled system which will bring contenders like the Tata 155 mounted gun - Which incidentally uses the same Denel L52 G5 turret which caused the Bhim to be cancelled. The system again is the same as was proposed by the OFB a decade back but in new avatar where it uses some targeting changes and a tata platform instead of the Tatra. Other contenders are the Kalyani Group/ELBIT Systems - Soltam, Larsen & Toubro/Nexter - Caesar, and the Punj Lloyd/Yugo 's - NORA. A few years ago incidentally the the towed versions of Soltam and G5 both failed accuracy trials of India, not that it says much as nature of Indian Army trails are always on the cusp of unrealistic. The acquisition plan falls straight at 800 mounted Guns + 100 SPG. The tracked self propelled gun, K9 Vajra's are on order, but the 800 mounted guns are again facing delays.

155 MM Catapult : Along with the current acquisition plans another approach to plug the gap for the High Mobility artillery would be to re-evaluate the Arjun Catapult with the Metamorphosis 155mm gun, as the prototype of the system with the same gun with the 130mm version exists and has been tested. With more than 700 M46 guns available for upgrades, and mounting system available, a re-engineered catapult with 155 mm M46 gun on one of the best cross country chassis, would be a efficient solution. Given that road map of Indian army only has 100 tracked units an additional 200 tracked catapults would be a lethal solution to provide artillery cover to fast moving infantry and armored brigades.

Light Mobile Artillery - The effectiveness of the 105mm light field gun is renowned within the Indian army circles. Kalyani Group is offering such a solution with the Garuda, which is a highly mobile system and uses the OFB LFG as its primary gun. A mounted version of the 105 mm gun on a wheeled platform can provide a highly mobile light mobile artillery out fit which can keep up with the ultra fast moving Regimental battalions of the Brigade of Guards.

Conclusion: Indian Self Propelled Artillery has evaporated in to thin air, this is not just in tune with the depreciating artillery profile of the Indian Army, but an exception where an entire fleet has been decimated due to neglect, mismanagement, and weak planning. Scuttling of domestic projects like Bhim and Arjun catapult, along with long delays in making decisions, today has completely rendered the
forces at great disadvantage in face of war. This constant deterioration will dent the war fighting capabilities of Indian army which will take decades to rebuild and in the interim, and in contingency will have to pay with asymmetrical number of casualties, because of lack of proper equipment. If Indian Army continues with this culture of Institutional inaction, the so-called conventional superiority would be only in number of Infantry soldiers facing superior Pakistani Firepower, the results as we can imagine would be devastating...


Join the discussion at the link below:

Terrible State of Indian Artillery ​ - Self Propelled Artillery
Posted by MilSpec at 8:35 PM